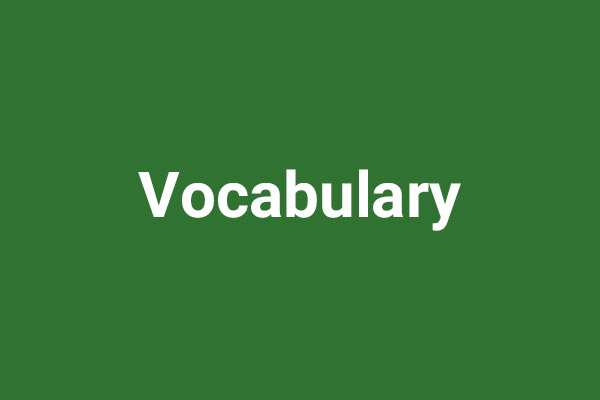 aberration (n.) : something that differs from the norm – In 1974, Poland won the World Cup, but the success turned out to be an aberration, and Poland have not won a World Cup since

abhor (v.) : to hate, detest – Because he always wound up getting hit in the head when he tried to play cricket, Marcin began to abhor the sport

acquiesce (v.) : to agree without protesting – Though Mr. Pospieszny wanted to stay outside and work in his garage, when his wife told him that he had better come in to dinner, he acquiesced to her demands

alacrity (n.) : eagerness, speed – For some reason, Simon loved to help his girlfriend whenever he could, so when his girlfriend asked him to set the table he did so with alacrity

amiable (adj.) :  friendly – An amiable fellow, Neil got along with just about everyone

appease (v.) : to calm, satisfy – When Jerry cries, his mother gives him chocolate to appease him

arcane (adj.) : obscure, secret, known only by a few – The professor is an expert in arcane Kashubian literature

cajole (v.) : to urge, coax – Magdas friends cajoled her into drinking too much

candor (n.) : honesty, frankness – We were surprised by the candor of the politician’s speech because she is usually rather evasive

circumspect (adj.) : cautious – Though I promised Marta’s father I would bring her home promptly by midnight, it would have been more circumspect not to have specified a time

clandestine (adj.) : secret – Announcing to her boyfriend that she was going to the library, Maria actually went to meet George for a clandestine liaison

coerce (v.) : to make somebody do something by force or threat – The court decided that David Beckham did not have to honor the contract because he had been coerced into signing it

coherent (adj.) : logically consistent, intelligible – William could not figure out what Harold had seen because he was too distraught to deliver a coherent statement

complacency (n.) : self-satisfied ignorance of danger – Simon tried to shock his friends out of their complacency by painting a frightening picture of what might happen to them

confidant (n.) : a person entrusted with secrets – Shortly after we met, he became my chief confidant

connive (v.) : to plot, scheme – She connived to get me to give up my plans to start up a new business

cumulative (adj.) : increasing, building upon itself – The cumulative effect of hours spent using the World English website was a vast improvement in his vocabulary and general level of English

debase (v.) : to lower the quality or esteem of something – The large raise that he gave himself debased his motives for running the charity

decry (v.) : to criticize openly – Andrzej Lepper, the leader of the Polish Self Defence party decried the appaling state of Polish roads

demure (adj.) : quiet, modest, reserved – Though everyone else at the party was dancing and going crazy, she remained demure

deride (v.) : to laugh at mockingly, scorn – The native speaker often derided the other teacher’s accent

despot (n.) : one who has total power and rules brutally – The despot issued a death sentence for anyone who disobeyed his laws

diligent (adj.) : showing care in doing one’s work – The diligent researcher made sure to double check her measurements

elated (adj.) : overjoyed, thrilled – When he found out he had won the lottery, the postman was elated

eloquent (adj.) : expressive, articulate, moving – The best man gave such an eloquent speech that most guests were crying

embezzle (v.) : to steal money by falsifying records – The accountant was fired for embezzling €۱۰,۰۰۰ of the company’s funds

empathy (n.) : sensitivity to another’s feelings as if they were one’s own – I feel such empathy for my dog when she’s upset so am I

enmity (n.) : ill will, hatred, hostility – John and Scott have clearly not forgiven each other, because the enmity between them is obvious to anyone in their presence

erudite (adj.) : learned – My English teacher is such an erudite scholar that he has translated some of the most difficult and abstruse Old English poetry

extol (v.) :  to praise, revere – Kamila extolled the virtues of a vegetarian diet to her meat-loving boyfriend

fabricate (v.) : to make up, invent – When I arrived an hour late to class, I fabricated some excuse about my car breaking down on the way to work

feral (adj.) :  wild, savage (That beast looks so feral that I would fear being alone with it

flabbergasted (adj.) :  astounded – Whenever I read an Agatha Christie mystery novel, I am always flabbergasted when I learn the identity of the murderer

forsake (v.) :  to give up, renounce – I wont forsake my conservative principles

fractious (adj.) :  troublesome or irritable – Although the child insisted he wasn’t tired, his fractious behavior _ especially his decision to crush his jam sandwiches all over the floor _ convinced everyone present that it was time to put him to bed

furtive (adj.) : secretive, sly – Claudia’s placement of her drugs in her sock drawer was not as furtive as she thought, as the sock drawer is the first place most parents look

gluttony (n.) : overindulgence in food or drink – Helen’s fried chicken tastes so divine, I don’t know how anyone can call gluttony a sin

gratuitous (adj.) :  uncalled for, unwarranted – Every evening the guy at the fish and chip shop gives me a gratuitous helping of vinegar

haughty (adj.) : disdainfully proud – The superstar’s haughty dismissal of her co-stars will backfire on her someday

hypocrisy (n.) : pretending to believe what one does not – Once the politician began passing legislation that contradicted his campaign promises, his hypocrisy became apparent

impeccable (adj.) : exemplary, flawless – If your grades were as impeccable as your brother’s, then you too would receive a car for a graduation present

impertinent (adj.) : rude, insolent – Most of your comments are so impertinent that I don’t wish to dignify them with an answer

implacable (adj.) : incapable of being appeased or mitigated – Watch out: once you shun Grandmother’s cooking, she is totally implacable